Drivers warned to look out for deer roaming on to the country’s roads.

Drivers are being warned by Highways England to look out for deer roaming on to the country’s roads and posing risks to road users. The warning comes after five deer were found dead at one location on the A35 in Dorset recently.

Figures collated from various studies suggest at least there could be some 400 people injured in deer-related collisions each year, and potentially around 20 people killed. 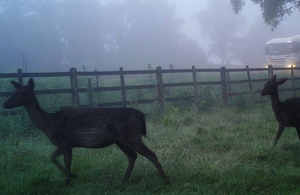 At this time of year, deer collisions peak as many of the animals cross roads seeking new territories. The highest risk of collisions is between sunset and midnight, and the hours shortly before and after sunrise.

The Deer Initiative and Highways England have teamed up to give advice to drivers.

Sadly, the outcome of a collision involving a deer can be much more catastrophic than vehicle damage or injury to the animal.

You may be well-travelled and on a well-known route without a previous sighting, but there may be deer hidden in nearby foliage or woodlands and some species of deer can gather often in large groups; you may have seen one and avoided it but others may follow and unexpectedly dart out into the roadway.

We want everyone travelling on our roads to reach their destination safely and with as many as 1.5 million wild deer living across Britain it is vital for drivers to be aware of their presence, to be extra vigilant, especially at this time of year when deer are on the move, and to follow our advice.

Deer signs are placed at locations where the animals are known to be active and are likely to cross; they help inform drivers of the need to slow down to give more time to react.

The advice to drivers is:

“The recent spate of accidents is a stark reminder about the dangers of deer on our roads. We urge drivers to check their speed and stay alert especially when they see deer warning signs or are travelling through a heavily wooded or forested stretch of road.”

Recently, Highways England traffic officers removed five dead deer in one day from the central reservation on the A35.

Figures collated from a number of studies suggest that while it is safe to say 40,000 deer are killed in vehicle collisions every year, this figure could be as high as 74,000 across Britain as a whole. Conservative estimates of 400 injuries to motorists and passengers related to these collisions could in fact be nearer 1000 annually.

Accurate records of deer-vehicle collisions are vital as they help build an accurate picture of the roads most at risk of deer collision which can then be assessed, and appropriate measures to tackle the issue can be put in place. Drivers are urged to report any incidents via the Deer Aware website.

Highways England works with partners including the Deer Initiative to identify deer-related collision ‘hotspots’ and to take appropriate measures to reduce the risk, including installing deer-proof fencing and constructing larger culverts which provide an alternative route for deer to cross the road.

If you hit a deer while driving, your priorities in this order are: