Normalising the shooting of deer at night will have long term implications for their welfare and distribution says Scotland’s deer managers who want to be consulted on new control methods.

Public agencies are considering thermal and night vision equipment with a view to potentially legalising its use for lowering deer numbers. Shooting deer at night is prohibited in Scotland unless authorised by Scottish Natural Heritage (SNH) and is not legal in countries such as Germany, Sweden, Denmark or Austria.

However, The Scottish Gamekeepers Association (SGA) believe Scotland’s iconic deer are already changing their behaviour due to being targeted by controllers in darkness. Applications to SNH to control deer at night to protect forestry have risen by over 300 percent in the last decade, as public agencies move from fencing as a management solution. 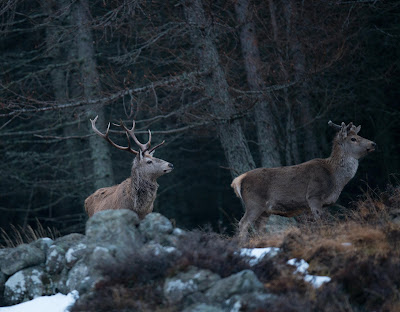 The SGA believes this, coupled with recreational disturbance, is causing deer to move into areas such as the lowlands, where mounting damage and vehicle collisions are occurring. They fear that, if new technology normalises night shooting further, there will be unconsidered animal health consequences as well as major changes to the way Scotland’s deer behave.

“There are a number of positive uses for this equipment currently in spotting and counting deer*, but what we ask is that professional deer managers are consulted on how the technology is to be used in future,”

“There is a wider picture. Deer feed in the morning and rest up during the day. However, due to more people using the hills, they can be on the move in daylight and they are also getting targeted now at night time to protect forestry. They are constantly harassed, which causes them to disperse and also impacts on body health.

“Whilst the technology has merits, it could further legitimatise night shooting in Scotland and we will move further away from managing deer in daylight and in season which is better for welfare, safety, quality venison and is more selective and humane than just killing any deer.

“We need to be asking why we have got to a place where night shooting of an iconic species in Scotland has become more of a first resort, yet it is illegal in many European countries.”