Public Health England (PHE) has reported that Tick-borne encephalitis virus (TBEV), which is endemic in many European countries, has been found for the first time in a very small number of ticks in Thetford Forest and more recently within The New Forest.

These are early research findings from work carried out in conjunction with the Emerging and Zoonotic Infections National Institute for Health Research (NIHR) Health Protection Research Unit at the University of Liverpool and indicate the need for more work, however, the risk to the general public is currently assessed to be very low.

“BDS is aware of the recent discovery of the TBE virus in ticks in the New Forest. The Society has been actively involved in the research that has led to this finding. The Society endorses the call for public tick-awareness, especially when spending time in the countryside where cattle, sheep, rodents, deer, birds and many warm-blooded creatures carry ticks and deposit them in grass and undergrowth”. 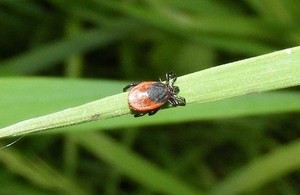 "There are in the UK a number of tick-borne diseases. The factors affecting the abundance of ticks (and infectivity of ticks) are complex, but include amongst others, habitat (ticks are more abundant in or near woodland) and winter climate (more adult ticks survive warmer winters). Relationship between the density of ticks in the environment and density of large herbivores such as sheep or deer is less clear. There is some evidence that where deer and sheep are completely absent, the overall density of ticks in the environment is reduced, but there is considerable uncertainty whether, once deer or sheep are present, actual deer density has any further effect.

While some studies have claimed to show a weak relationship between environmental tick burdens and deer densities, other studies in the UK and elsewhere in Europe have shown do such relationship. Further, deer numbers in the UK are comparatively trivial by comparison to the numbers of free-ranging hill sheep and other large herbivores, so that while in some parts of the country deer numbers have shown some increase over recent years, the effect of this on the overall population of large herbivores present would be relatively minor.

However, with some evidence of an increase in tick-borne diseases over recent years, it is important to check for tick bites after potential exposure during a country walk and remove any found as soon as practically possible. “

Be 'tick aware' and take tick precautions, particularly when visiting or working in areas with long grass such as woodlands, moorlands and parks.