Ian works extremely hard for Highlands Branch and is noted as one of their most willing regular volunteers.

The Jim Taylor Page Trophy is awarded annually to a BDS branch member nominated by their peers for their outstanding contribution to the branch.

Stan whose first introduction to BDS was at the Society’s Woburn inauguration in 1963, served on Wessex branch committee for over 50 years, latterly as its President.

The New Forest Show made the perfect venue for the award as Stan remembers setting up BDS’s first exhibit at a much earlier show held some forty years ago.

While deer are certainly among the many species of animals and birds, which can act as hosts to, ticks, it might be a mistake to assume that they carry a notable responsibility for encouraging high numbers of them.

Although there is some evidence that, where deer and other large herbivores such as sheep are absent, the numbers of ticks present in the environment may be reduced, scientific opinion remains uncertain as to whether, once deer and sheep are present, actual numbers have any real effect on overall tick burdens.

Current research on the spread of Lyme disease suggests that deer may only play a very small part, and that it is likely that some species of birds are far more significant carriers of the infective organism.

Announcement on behalf of The Deer Initiative for England and Wales. 12th July 2019.

After 24 years, Deer Initiative Ltd (DI Ltd), the executive arm of the Deer Initiative Partnership (DIP) is to cease operating at the end of the current financial year 31st March 2020.

The DI was established in 1995 to deliver the objectives of the DIP in the form of advice and guidance and to advocate the sustainable management of wild deer. The organisation has worked with a range of partners across government, academia and the private sector to develop a broader understanding of the need for well-evidenced, effective and humane deer management.

BDS At The Game Fair, Hatfield

BDS At The Game Fair, Hatfield

Visit us at stand number N1429

Come and meet the BDS team at The Game Fair, Hatfield where this year we will be launching the new BDS Deer App and have tablets on hand so you can try it out.

Our stand this year includes a new video screen featuring some of this year’s BDS competition winning images along with a new short video created by Matt Roseveare a young award-winning wildlife photographer and filmmaker.

We are also delighted to have professional photographer Andrew Yates joining us as our guest displaying some of his stunning work and talking about how to capture good images. Andrew trained in Fine Art, Photography and Design and has travelled extensively gathering a myriad of pictorial stories along the way.

Reminder to the Public About Young Deer

Reminder to the Public About Young Deer

BDS has noted that members of the public are often unaware of how to treat young deer and nursing females they may come into contact with.

Footage came to light this week on Twitter (this has now been removed) showing a playful dog out of control and clearly causing distress to a young deer. Sadly the owner misunderstood this as simply rough play, however, our followers were quick to highlight the real risks this situation presented.

Read more: Reminder to the Public About Young Deer

A Lewis school teacher captured a recent image of what at first glance appears to be two red deer hugging.

However, Susy Macaulay Local Government Reporter for the Press & Journal Inverness got in touch with BDS to find out what was really going on. 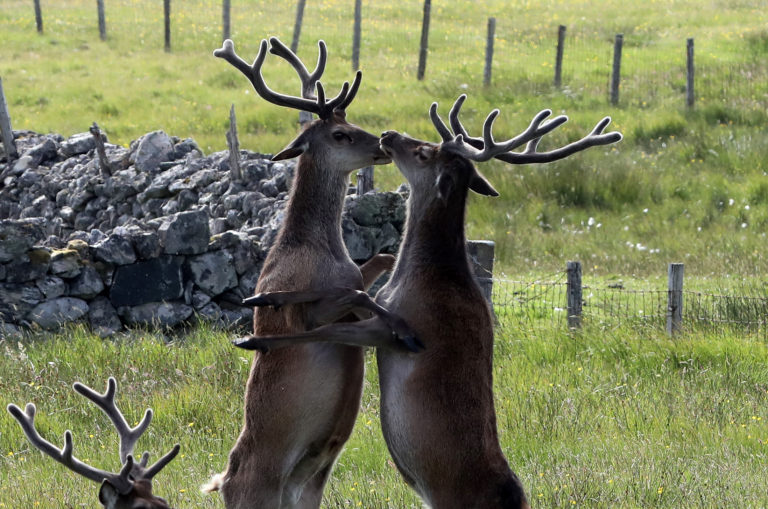 Health: Watch out ticks about!

Health: Watch out ticks about!

We all like to enjoy being outdoors, but it's important to also be tick aware!

The main tick feeding season is late spring, early summer, and autumn when they can bite if you are walking through a tick-infested area. Ticks can also be carried home by pets.

Ticks are known to transmit a range of pathogens to humans, the most common of which is the bacterial infection that causes Lyme disease. Lyme disease is the most significant tick-borne infection in England and Wales in terms of severity and incidence, the latter of which has increased in the past decade.