When fully grown stags weigh between 40 to 70kg and hinds 30 to 45kgs. By comparison, an average adult man in Britain is 1.77m high and weighs 79kg.

Sika are similar to fallow deer in coat colour. They vary from pale yellow/brown through to red/brown with white spots in the summer months to dark grey and black in the winter. There is often a distinct dark coloured dorsal stripe running the length of the back.

Sika have a shorter tail than the fallow and its black stripe is less distinct. There are very noticeable white glands on the hind legs of the deer and they have a distinctive white rump.

The sika’s head is small in comparison to the rest of the body. Their antlers are widely spaced and the angle of the forward point from the main antler beam is about 45°. They have a maximum of 8 points on their antlers. Hinds do not have antlers.

The tracks of a sika are similar to those of a red deer but they are slightly smaller in length (about 7cm) and narrower.

Sika deer in the UK were introduced from the Far East into Britain in 1860. While animals from a number of sources were introduced into enclosed parks the only free-living form in Britain is considered to be the Japanese sika. It is possible that almost all (if not all) living English, Scottish and some Irish sika are descendants from only one stag and three hinds introduced to Viscount Powerscourt’s deer park at Enniskerry, Eire in 1860.

The preferred habitat is coniferous woodlands and heaths on acid soils. The distribution of sika deer in Scotland is widespread and expanding from west to east with a strong population in Peebles-shire. They are patchy in England (bands exist across the north and south) and Northern Ireland (in County Fermanagh and County Tyrone).

Sika graze on grasses and dwarf shrubs, especially heather, although coniferous tree shoots and tree bark may occasionally be taken in small quantities. Browsing of tree shoots and agricultural crops and bark stripping and bole scoring (gouging with the antlers) of plantation trees puts sika in conflict with farmers and foresters due to economic damage. Conversely, many country and forest estates can gain substantial revenue from recreational stalking and/or venison production. Whether in conflict or used as a resource, sika populations require careful management to maintain health and quality and ensure a sustainable balance with their environment. 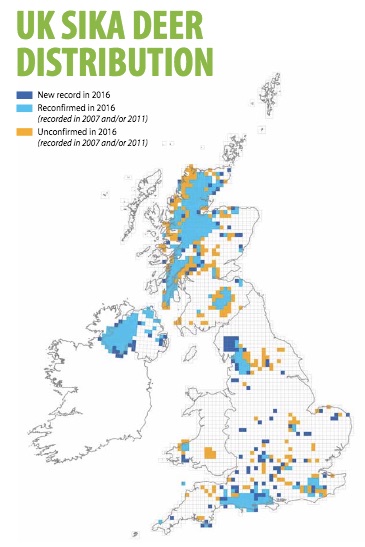 Males spend most years alone occasionally forming herds together
DID YOU KNOW?

Sika males are called stags, females hinds and young calfs.
DID YOU KNOW?

Sika deer were introduced from the Far East into Britain in 1860
DID YOU KNOW?

Sika deer have heart shaped white markings with black upper border on the rump with a white tail.
DID YOU KNOW?

Previously found from northern Vietnam in the south to the Russian Far East in the north, sika are now uncommon except in Japan.
DID YOU KNOW?

Its name comes from shika, the Japanese word for "deer". In Japan, the species is known as the nihonjika.
DID YOU KNOW?

Sika deer are found throughout the city of Nara and its many parks and temples like Tōdai-ji, as they are considered to be the messengers of the Shinto gods.
DID YOU KNOW?

In the 1900s, King Edward VII presented a pair of sika deer to John, the second Baron Montagu of Beaulieu. This pair escaped into Sowley Wood and were the basis of the sika to be found in the New Forest today.
Previous
Next

The breeding season, or rut, occurs from the end of September to November. The environment has a strong influence on mating strategy. Typically stags defend a rutting territory, much like fallow deer, and they may also switch to harem-holding when a group of hinds has been assembled. Less typically, males may congregate to form a lek or may simply wander throughout the hinds’ range in search for receptive hinds.

A single calf is born during early May to late June after a gestation period of 7 ½ months. They can live, exceptionally, up to 18 years.

Sika deer live in single sex groups for most of the year, only coming together during the breeding season and in winter when times are harder.

Sika are becoming regarded as a problem in areas of conflict since the damage that they cause is serious and the rate of hybridisation with red deer can be alarming.

Hybridisation appears to be most pronounced at the edges of population ranges where both species meet. The first cross between the species has the appearance of both parents, but subsequent crosses result in the hybrid having the dominant parental appearance. This makes selective culling impossible, potentially reduces income from sport shooting and poses a major threat to the genetic integrity of native red deer. Indeed, some suggest that there are no pure bred red deer surviving in mainland Britain and only sika in the New Forest and Peebles-shire remain pure.

Sika are renowned for their repertoire of calls. From groaning stags to clacking noises, whistles and screams, they have a huge variety of vocalisations used in many different situations. Both sexes bark when alarmed.

Sika are active throughout the 24-hour period but are more active during the hours of darkness in populations experiencing frequent disturbance.