Over the years we have come across a number of common myths about deer that simply are not true or can not be confirmed due to a lack of evidence. These myths can be harmful, at times presenting an unfair or inaccurate picture of our wild deer populations.

On our new MythBusters page, we look at a selection of these common myths alongside the current known information in relation to each myth. Our aim is to provide a clearer understanding of wild deer across the UK.

Below are some common myths about wild deer in the UK.
Click on each myth to reveal the truth.

Deer are damaging the environment 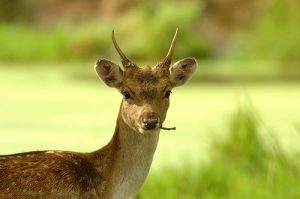 Deer are an important part of the natural environment.  Their grazing and browsing activity can alter vegetation community structure, reducing some plants and promoting the growth of others. Their droppings can disperse nutrients and seeds widely around the environment, supporting the growth of some plant and invertebrate communities.

There are occasions, of course, where deer numbers become considered excessive and the vegetation is over-exploited.    At such times humans may choose to manage deer numbers to alleviate deer impacts.

Across much of the UK, such management already takes place, and it can be effective, but there remain places where deer impacts continue to be considered excessive.  Where deer come into conflict with human activities such as agriculture and forestry, which also make demands on the environment, this can be particularly apparent.

There are two million deer in the UK 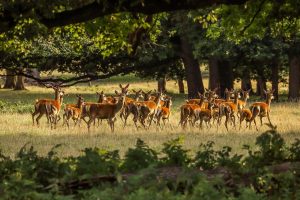 The figure of 2 million deer is widely quoted but appears to have its origins in an estimate from an unknown source, which has since been taken up by the media and others. In 2018 The Mammal Society estimated that there might have been somewhere between 649,200 and 1,468,000 deer in Great Britain but was careful to caveat a lack of data in some cases. The truth is that no one really knows how many deer there are in the UK.

The evidence certainly suggests that UK deer populations have spread and risen in the past decades.  However, the figure of 2 million cannot be substantiated. 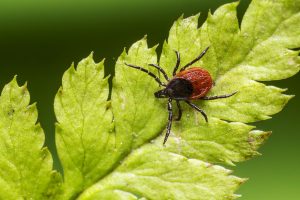 Current research on the spread of Lyme disease suggests that deer may only play a very small part and could even have a positive influence.

The initial infection of ticks with the bacterium that causes Lyme disease occurs not from deer, but while the juvenile ticks are feeding on smaller animals (voles, mice, rabbits, and small birds).  Indeed, surveys of different wildlife species indicate that the most significant carriers of Borrelia bacteria include blackbirds, thrushes, and robins.

Recent scientific research suggests that, while deer are but one of many hosts for the ticks that can carry Borrelia bacteria, there is no confirmed link between deer densities and tick burdens.  Furthermore, deer are not competent hosts for Borrelia because they mount an effective and lasting immune defence against it. Deer may actually play a part in cleansing any subsequent ticks which feed on them by removing the Borrelia from the tick’s system and thus preventing it from infecting anything else. 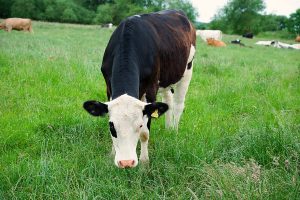 Wild deer are generally very healthy animals but may be susceptible to a variety of diseases which can affect livestock.   The role of deer in maintaining livestock diseases is far from clear, so there are few instances where we can confidently advocate management practices that can reduce the risk of disease transmission from deer to livestock.

It is OK to feed deer 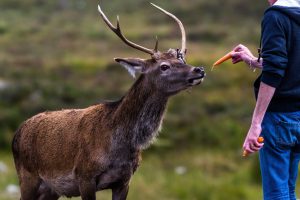 Deer are great opportunists and can quickly learn to overcome a natural fear of man in return for an easy mouthful or two. Regrettably, feeding deer and other wild animals can encourage an unhealthy dependency as well as having other potential consequences.

Deer, even those kept in parks, will usually find all that they need naturally and if there is a need for any specialist supplementary feed this will be provided by rangers or park keepers.  A deer’s digestive system can take some time to adapt to any new dietary item, and unusual foodstuffs, especially processed foods, may be positively harmful.

All deer, even those accustomed to humans, are essentially wild animals but there have been instances when they have been encouraged to develop unnatural levels of assertiveness on learning to accept food from human hands.

Deer under any circumstances can still be nervous animals and a sudden fright might cause them to lash out. It only takes a slight movement of a stag’s head for them to accidentally cause injury to someone standing close by.  In addition, a deer’s hooves are very sharp and can be used in self-defence.

The feeding of deer by anyone other than those responsible for kept herds is strongly discouraged in the interests of deer welfare and human safety.

It is cruel to shoot deer 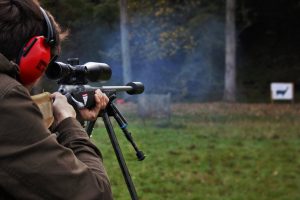 Where deer impacts are considered excessive,  people may choose to control their impacts or their populations.  This might include the use of fences or tree guards to protect vulnerable areas at different spatial scales, crop protection dogs to exclude deer from high-value crops, feeding repellents to protect tree saplings, and can also include culling to reduce population size, density or to manage deer movement behaviour.

If population reduction is chosen as a preferred outcome, then realistically, culling is the only viable option in the majority of circumstances.

Some have advocated the reintroduction of large predators to control deer numbers, but we would need to accept sufficiently large numbers of very specific large predators to kill enough of the many hundreds of thousands of deer added to the national population each year to affect a population reduction. That really is not feasible for the vast majority of the UK’s land area.

Fertility control has also been advocated as a useful method, but the compounds that could reduce deer fertility are few, can cause unacceptable side effects (e.g. continuous antler growth in male deer), could not feasibly be administered at large spatial scales and to a sufficiently large proportion of the population needed to control an open population (i.e. one that is subject to immigration and emigration from other populations), and would take a long time to affect population decline because non-breeding adults tend to live longer.

Again, this could be a tool applicable for a limited number of niche applications, but in the vast majority of circumstances where a reduction in deer population size is the desired outcome, humane, lawful culling by stakeholders operating collaboratively over the landscape occupied by the deer population in question, is the only approach that can feasibly expect to achieve that outcome.

Culling of wild deer can only lawfully be achieved by shooting using a well-defined combination of firearm, bullet and cartridge, and only at certain times of year. Shooting is best done by people trained in the safe, humane and lawful control of deer by culling to ensure the highest standards of welfare for deer that are shot.  A fundamental aim of humane deer culling is to ensure that it is not cruel and that it adheres to strict welfare standards.

Do you have a deer myth or query you would like checked out by the British Deer Society? Then please get in touch today.