Roe deer when fully grown they weigh between 10 to 25kg. By comparison, an average adult man in Britain is 1.77m high and weighs 79kg.

Male roe are called bucks, females are does and the young kids.

Roe vary in coat colour throughout the year, being most distinguishable in the summer when their coats are bright rusty red. In winter, their coats turn a dull, slate grey colour.

Both sexes have a prominent white rump and no visible tail. Females (does) have a small ‘tush’ or tuft of hair similar to a tail at the base of the rump patch during the winter.

Males (bucks) have small antlers, which have three points each when fully grown. Antlers are described as ‘pearled’ or ‘bearded’ when they are heavily textured with lots of nodules.

Roe are dainty creatures and leave small hoof prints (slots) about 4cm long in soft ground. They use well-worn paths across their range along, which you may find faeces either scattered or in small groups.

Other characteristic signs are frayed areas of small trees where they rub on over-hanging branches and disturbed areas of soft ground and vegetation which deer have scraped and dug with their hooves. Frequently they also urinate to mark their territory.

The roe deer is territorial, and while the territories of a male and a female might overlap, other roe deer of the same sex are excluded unless they are the doe’s offspring of that year.

The roe is one of the truly native deer of the British Isles, the other being the red deer. Records of them date to before the Mesolithic period (6000 to 10000 years BC).

They are abundant throughout the UK but are not found in Northern Ireland.

They are strongly associated with woodlands and have increased in both population and distribution with the increase in woodland planting in the 20th century and strategic reintroductions in Victorian times. Previously, roe deer suffered an almost catastrophic decline due to over-hunting and deforestation.

Roe deer are particularly associated with the edges of woodlands and forests. They are also found in areas with copses, scrub and hedgerows and use agricultural fields in these areas too. They are increasingly entering areas closer to our towns and cities as they take advantage of more urban habitats.

Roe are often seen as both a positive and negative influence in the countryside. They can cause damage to young woodlands and agricultural crops through browsing, however many landowners and rural industries utilise the stalking of roe deer and the sale of venison as a substantial supplementary financial income. It is now essential to balance the needs of a sustainable healthy population of roe deer with those of the environment. 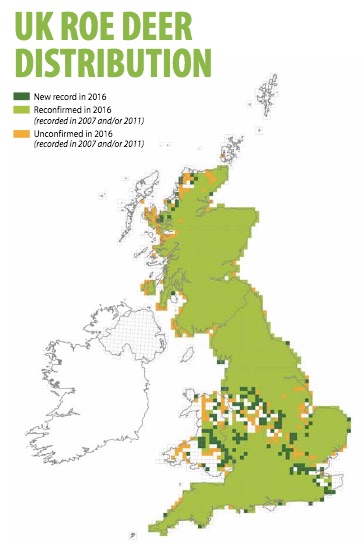 Felix Salten’s 1928 book ‘Bambi’ was originally about the life of a roe deer
DID YOU KNOW?

Male roe are called bucks, does hinds and the young kids.
DID YOU KNOW?

Roe deer are widespread in Europe, from the Mediterranean to Scandinavia, from Scotland to the Caucasus, and east to northern Iran and Iraq.
DID YOU KNOW?

Roe rut during July and August.
Previous
Next

The rut, or breeding season, occurs between mid-July to mid-August. Bucks become aggressive and maintain exclusive territories around one or more does prior to the rut. Fights between bucks can result in serious injury or death with the winner taking over the loser’s territory or attendant doe. Courtship involves chasing between the buck and doe for some time until the doe is ready to mate.

Although mating occurs in this period the fertilised egg does not implant and grow until January. This is thought to be an adaptation to avoid giving birth during harsh northern winters. The gestation period is nine months (four months of no embryonic growth followed by five months of foetal growth) with kids (usually two or three) being born May – June. Heavy mortality may occur shortly after birth and during the first winter.

Roe does do not maintain exclusive territories but live within overlapping home ranges. Males mate with several females and females mating with several males has also been observed.

Roe deer are solitary, but may form small groups in winter. They are active throughout the 24-hour period but make more use of open spaces during the hours of darkness in populations experiencing frequent disturbance. Peak times of activity are at dawn and dusk. Long periods are spent ‘lying up’ where the deer lies down to ruminate between feeding bouts.

Both sexes make dog-like barking noises when startled or alarmed. During the breeding season does attract bucks with a high-pitched piping call. Bucks respond with a rasping noise during courtship. Young roe deer make a high-pitched whistle to attract their mothers when they become lost.