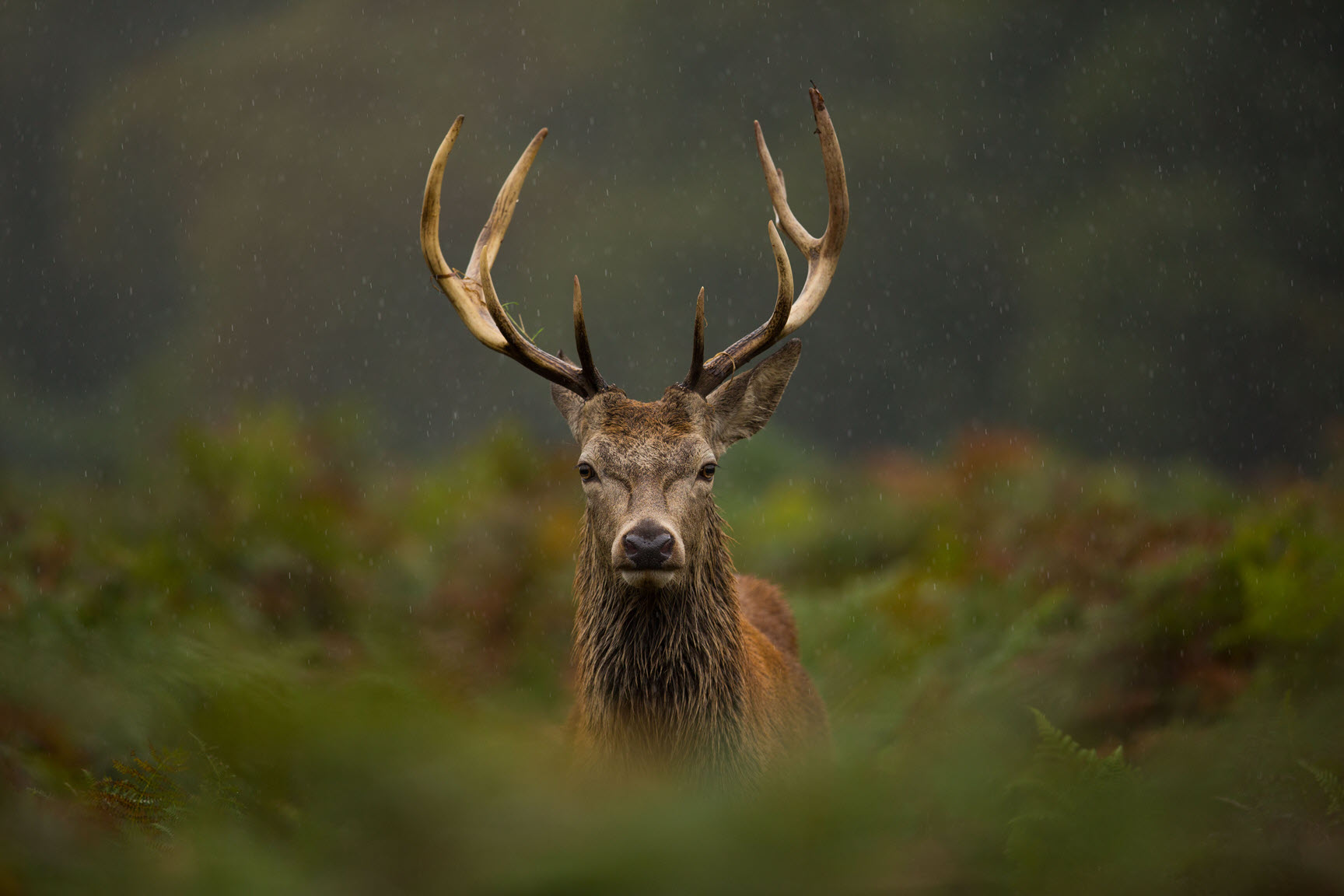 Red deer
The red deer is Britain’s largest land mammal. When fully grown males (stags) weigh between 90 to 190kg and stand at around 1.07 to 1.37m tall at the shoulder. Photo by: K Damian
CHECK THE STATS

Females (hinds) weigh 63 to 120kg and stand up to 1.07 – 1.22m at the shoulder. By comparison, an average adult man in Britain stands at 1.77m high and weighs 79kg. Deer living in open upland habitats tend to be smaller than those living in more wooded lowland areas.

Red deer are a distinctive rusty red colour in summer turning to a brown winter coat. Adults are not spotted.

They have a short tail and a pale rump patch with no particular distinguishing features.

They also have a large head with wide-spaced brown eyes. The stag’s antlers are the species most distinguishing feature. They are highly branched and the branches increase with age with multiple points on each antler. The angle of the forward point from the main antler beam is about 90° (unlike the sika). Antlers are cast during March/April and begin to regrow to be fully formed and clear of velvet in August/September.

Red deer hoof prints or ‘slots’ are unmistakably large and can be confused with sheep or goat marks. Slots may be distorted with the gait of the animal and/or soft ground. A stag’s front hoof may measure 8-9 cm in length.

The red deer (Cervus elaphus) is one of the largest deer species.

Red deer are a native species having migrated to Britain from Europe 11,000 years ago. They were used extensively by Mesolithic man as a source of food, skins, and tools (bones and antlers). However, the development of agriculture by Neolithic man cleared swathes of forest to make way for fields and this loss of forest encouraged the decline of red deer populations, which became confined to the Scottish Highlands, south-west England and a few other small, scattered populations

The Normans protected deer in parks and ‘forests’ (often devoid of trees!) for royal hunting, but this protection was lost during the Medieval period causing another decline in numbers in England. Victorian re-introductions of ‘improved’ stock (often inter-bred with larger related species such as wapiti), escapes from deer parks, natural spread, together with an increase in the Highlands and in forest and woodland cover since the early 20th century, mean that red deer are now widely distributed and are expanding in range and number. 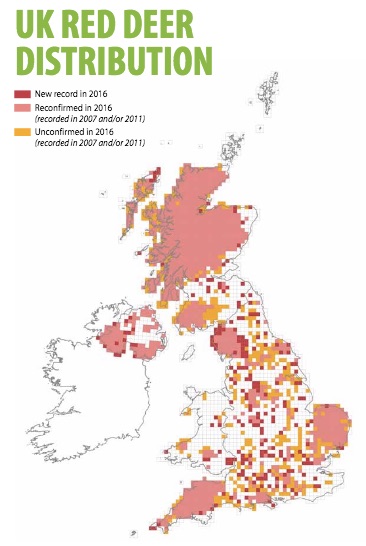 Red deer are widely depicted in cave art found throughout European caves, with some of the artwork dating from as early as 40,000 years ago.
DID YOU KNOW?

Red deer males are called stags, females hinds and the young calves.
DID YOU KNOW?

The red deer (Cervus elaphus) is one of the largest deer species and are closely related to the slightly larger American elk
DID YOU KNOW?

Red deer inhabit most of Europe, the Caucasus Mountains region, Asia Minor, Iran, parts of western Asia, and central Asia. They also inhabit the Atlas Mountains region between Morocco and Tunisia in northwestern Africa.
Previous
Next

While preferring woodland and forest habitats in England and southern Scotland, red deer can adapt to open moor and hills as they have in parts of Scotland and south-west England. Native stock are common in the Scottish Highlands, Dumfriesshire, Lake District, East Anglia and the south-west of England. Feral stock are present in the north of England, North Midlands, East Anglia, the New Forest, and Sussex.

They graze on grasses and dwarf shrubs e.g. heather and bilberry. Woody browse, e.g. tree shoots, is taken when other food is limited during winter. However, grazing of tree shoots and agricultural crops puts red deer in conflict with farmers and foresters due to economic damage. Conversely, many country and forest estates can gain substantial revenue from recreational stalking and/or venison production. As well as being farmed for their venison red deer are also kept as ornamental park species in the UK. Whether in conflict or used as a resource, red deer populations require careful management to maintain health and quality and ensure a sustainable balance with their environment.

The breeding season, or the rut, occurs from the end of September to November. Stags return to the hind’s home range and compete for them by engaging in elaborate displays of dominance including roaring, parallel walks, and fighting. Serious injury and death can result from fighting but this only occurs between stags of similar size that cannot assess dominance by any of the other means. The dominant stag then ensures exclusive mating with the hinds.

Despite being sexually mature before their second birthday in productive woodland populations, only stags over five years old tend to mate. In woodland populations, hinds over one year old give birth to a single calf after an eight-month gestation, between mid-May to mid-July. Puberty may be delayed until three years old in hill hinds, which may give birth only once every two or three years.

Some Scottish hill populations suffer heavy infant mortality at and shortly after birth and during their first winter. Lifespan can be, exceptionally, up to 18 years.

In woodland red deer are largely solitary or occur as mother and calf groups. On open ground, larger single sex groups assemble, only mixing during the rut. In the Highlands of Scotland, large groups may persist for most of the year. Red deer are active throughout the 24 hour period but make more use of open spaces during the hours of darkness in populations experiencing frequent disturbance. Peak times of activity are at dawn and dusk. In the Highlands of Scotland red deer use the open hills during the day and descend to lower ground during the night.

The British Deer Society is the only charity dedicated to wild deer in the UK. Our  work engages in education and research to help ensure wild deer remain valued, healthy, and sustainable within the UK as an important part of its biodiversity.

We love deer and want to see them have a positive future. If you feel the same then please take a few moments to complete our short survey.

Your opinion matters and the results from this survey will help us focus our efforts on what is important to you.

To take part in the survey visit: https://www.surveymonkey.co.uk/r/65Z53LL 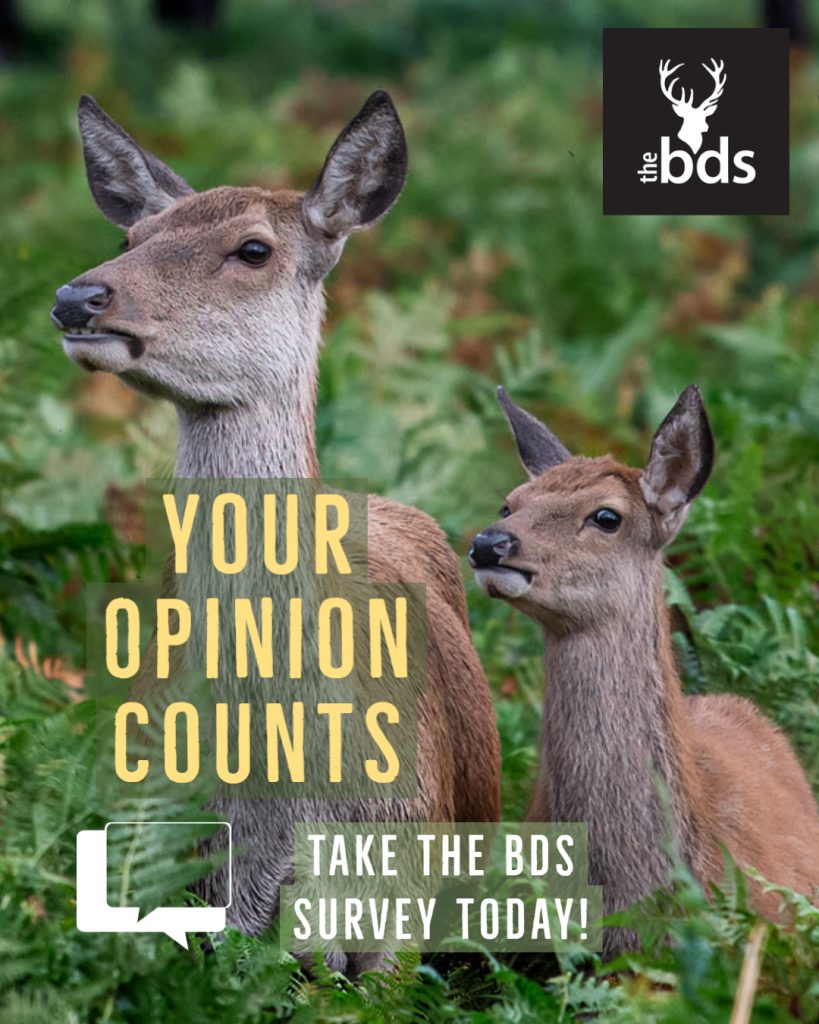