Male fallow called bucks, females does and the young fawns.

If you see a white deer it may well be a fallow as they have four main variations of coat which includes white:

They often have a distinctive black inverted horseshoe shape on their rumps, and a black stripe on their tails which are the longest of all British deer.

Fallow is the only deer species in the UK with palmate antlers. These become full-sized after the deer are three/four years old and can reach up to 0.7m in length. Facially, their head is more elongated than some species with large angular ears.

Does and their young give short barks when alarmed. Bucks groan loudly during the breeding season.

Throughout a large portion of the year the sexes remain separated and only congregate during the mating months.

Photo by: Lubos Houska
These elegant deer have long been prized as ornamental species and their history in the UK is closely linked to that of deer parks.
Fallow deer were first brought to Britain from the western Mediterranean during the Roman period when they were kept within enclosures known as ‘vivaria’. Genetic analysis has shown that these Roman fallow deer went extinct in Britain following the collapse of the Roman Empire.
It was not until the 11th century that fallow deer were reintroduced, this time from the eastern Mediterranean.
Initially, they were kept in parks as rare exotica but gradually their populations increased and they became an important source of venison for aristocratic tables. As the fashion for deer parks declined in the 15th century, many parks fell into disrepair and these medieval escapee deer are the foundation of the free-living population in Britain today.
Whilst non-native, fallow deer are considered naturalised and are locally abundant and increasing.
They are widespread in England and Wales, but patchy in Scotland, inhabiting mature broadleaf woodland with under-storey, open coniferous woodland, and open agricultural land. They prefer to graze grasses although they will take trees and dwarf shrub shoots in autumn and winter. 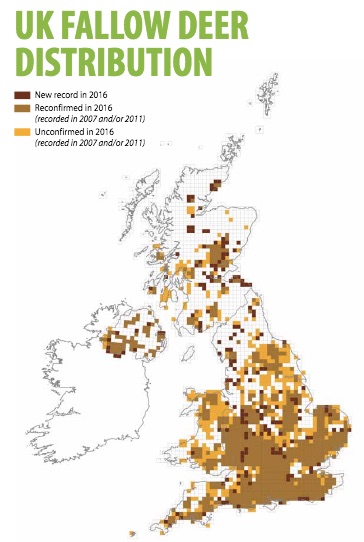 Fallow deer (Dama dama) are native to Europe, but have been introduced around the world.
DID YOU KNOW?

Finds at Fishbourne Roman Palace show that fallow deer were introduced into southern England in the 1st century AD.
DID YOU KNOW?

White fallow are not seen as often as the other three main colour types. They are not albinos as their eyes are a normal dark colour rather than pink or red.
Previous
Next

Population density and habitat influence both group size and the degree of sexual segregation.

Groups of adult males and females, usually with young, remain apart for most of the year in large woodlands, only coming together to breed. Sexes freely mix in large herds throughout the year in open, agricultural environments.

Damage caused by browsing of tree shoots and agricultural crops puts fallow deer in conflict with farmers and foresters and their ability to reach very high densities can result in high local levels of damage. Conversely, many country and forest estates can gain substantial revenue from recreational stalking and/or venison production.

Fallow deer are also farmed for their venison and are one of the most important ornamental park species in the UK.

Regardless of the context, fallow deer populations require careful management to maintain health and ensure a sustainable balance with their environment.

Behaviour depends upon the environment and population density. In most populations, bucks maintain a traditional, defended rutting stand. In others, a temporary rutting stand is maintained to attract sufficient does to herd them into a harem. In areas with very high buck densities a lek (a gathering of males engaging in a competitive display to attract potential mates) may be formed. In lower density areas bucks may simply seek out receptive females. In common with other large species of deer, during conflict, the bucks’ behaviour escalates from groaning and parallel walks to fighting. During the rut, bucks groan tremendously and does with fawns give a short bark when alarmed.

After mating, adult does give birth to a single fawn in June or July after a gestation of 229 days. Bucks generally live for 8 – 10 years although they can live as long as 16 years.

Fallow deer are active throughout the 24-hour period but make use of open spaces during the hours of darkness in populations experiencing frequent disturbance. Peak activity is at dawn and dusk with most daytime hours spent ‘lying up’, where they lie down to ruminate between feeding bouts.

Over the last 5 years, the British Deer Society has supported the Arts & Humanities Research Council funded ‘Fallow Deer Project’, which has been examining how, when and why the European fallow deer (Dama dama) spread around the world from its native homeland in the Mediterranean.

To find out more about the project watch the video Dama: The Deer that Walked the World.